Due to the renovation of the Panama Canal, the Bayonne Bridge is about to receive a similarly impressive upgrade.

Read on to find out more about the construction of this fascinating bridge and its currently proposed upgrade.

Plus: What services is Aqua Survey providing to support harbor expansion?

Last week Peter Zantal, a general manager at the Port Authority of New York and New Jersey announced that the raising of the Bayonne Bridge by 60 feet would be completed by 2016. Post-renovation, vessels will have 215 feet of clearance under the bridge, allowing the newer, larger Post-Panamax size vessels through.

A modern engineering feat of its day, the Bayonne Bridge has made it possible for commuters to drive easily from Staten Island, New York and Bayonne, New Jersey across the Kill van Kull since 1931. It’s been a pivotal part of expansion and transportation in the area and its intricate work and astute design has enabled it to last for nearly 80 years.

Created through collaboration between master bridge-builder Othmar Ammann and famed architect Cass Gilbert, the bridge has the distinction of being the fourth-longest steel arch bridge in the world. It was designated a National Historic Civil Engineering Landmark in 1985 by the American Society of Civil Engineers.

The Swiss-born Ammann designed seven of the twelve bridges which connect New York City to its surrounding areas. Ammann became known for creating bridges that were not only cost-effective and durable but also beautiful, which made him quite sought after during the Depression era.

Ammann chose the design of the bridge, a steel arch, over other bridge types as it was cheaper and would accommodate an addition in the future of rapid transit tracks. Soaring 266 feet over the Kill van Kull the bridge is 8,640 feet long.

After three years of construction, the Bayonne Bridge was completed on November 15, 1931 and cost nearly $13 million. At the time of its completion, it was the longest steel arch bridge in the world.

A Continued Tradition of Innovation

In a similar innovative spirit to Ammann’s work, the Port Authority has devised a plan for the renovations which will allow the bridge to remain open to motor vehicle traffic during the entire project. The Bayonne Bridge supports thousands of vehicles per day, in fact as of 2003, it was found that more than 20,000 vehicles per day cross between Staten Island and Bayonne. In order to allow this traffic to continue unobstructed a new platform will be constructed above the current one while traffic continues below. When the new platform is complete, the old one will be demolished, thus giving the bridge its new clearance height.

The Port of New York and New Jersey is the largest on the east coast. In 2010, over 32 million metric tons of goods worth more than $175 billion came through the harbor. 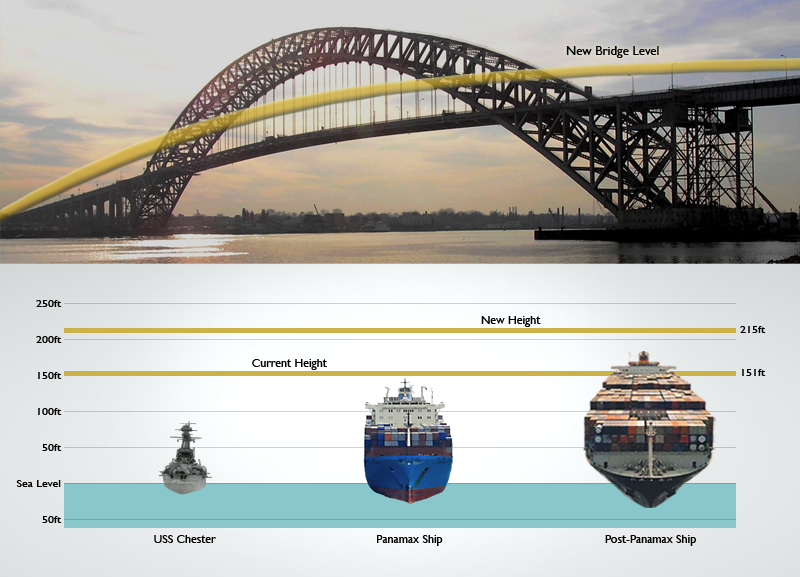 The More Things Change, The More They Stay The Same

Renovating New York Harbor is nothing new and has in fact been underway for many years in order to accommodate bigger and bigger vessels.  Aqua Survey has been there in one way or another for decades to support this ongoing expansion, particularly to our clients in the dredging industry who we routinely provide services to ranging from hydrographic surveys and sediment sampling to laboratory analyses and much more.

You may have noticed the USS Chester in the graphic above. It’s the same ship which was pictured traveling through the Panama Canal in August’s email about the reengineering of the Panama Canal.  Aqua Survey President Ken Hayes’s father served on the Chester during World War II.  He was only 17 when he enlisted in the Navy.