From survey-grade sonar to custom electromagnetic metal detectors, if you’re looking for something underwater, our Geophysicists can find it.  Aqua Survey owns and operates several geophysical survey tools to paint a highly detailed picture of your site.  We regularly perform hydrographic surveys, utility markout, and UXO markout. 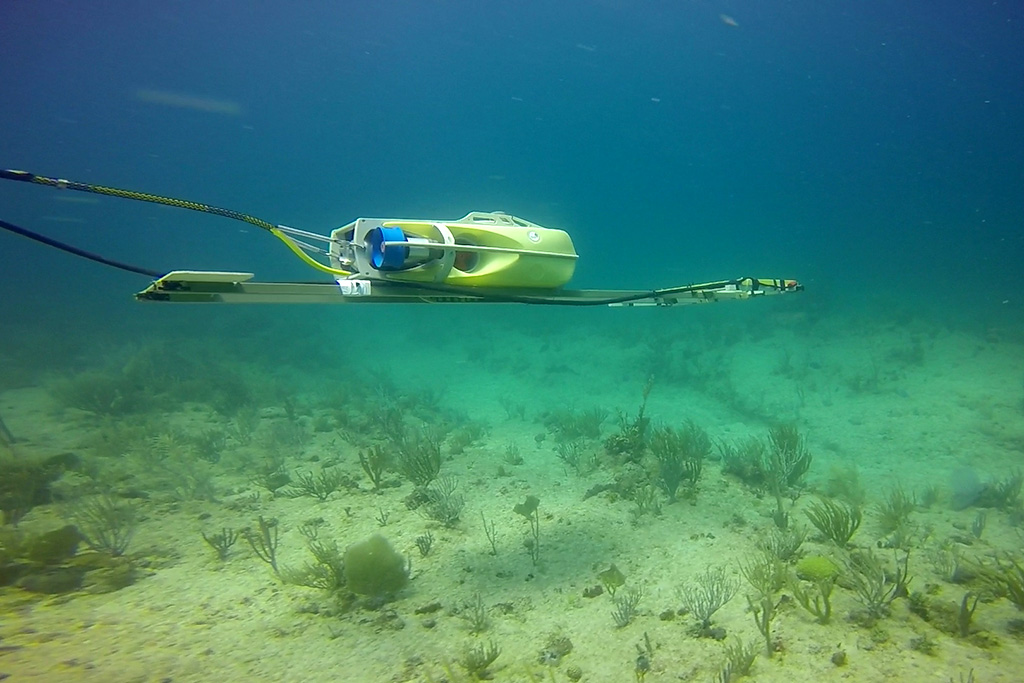 From survey-grade sonar to custom electromagnetic metal detectors, if you’re looking for something underwater, our Geophysicists can find it. 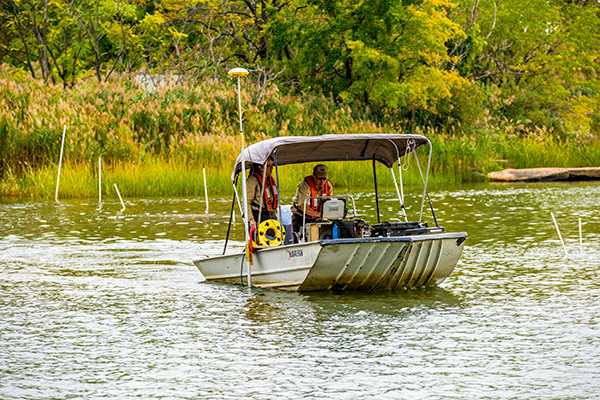 Hydrographic sonar equipment emits sounds that travel to the bottom (depth of the water) and then bounce back to the sounder at the surface.  The delay in the sound’s return to the surface is translated into water depth.  Bathymetric surveys provide clients with an accurate relief map of a pond bed, lakebed, riverbed or other area of interest.  Historically, bathymetric surveying was performed to chart the physical features of water bodies to allow vessels to navigate safely. 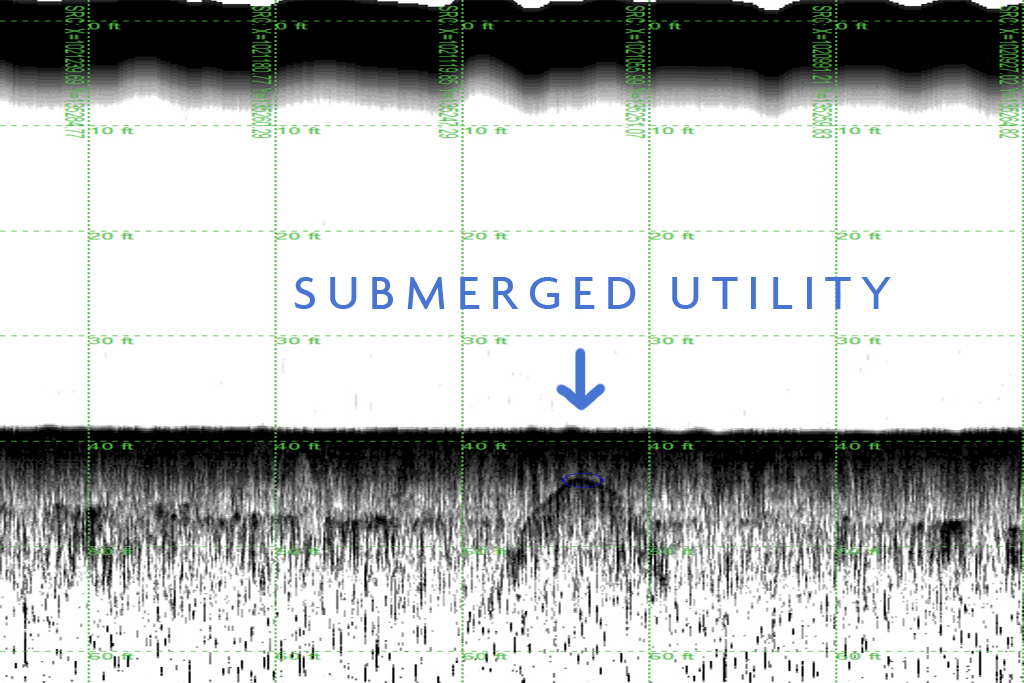 Aqua Survey utilizes Sub-Bottom sonar echoes to detect and map targets and layering within the beds of lakes, streams, rivers, estuaries and oceans.  The harder the target or strata, the harder and more resolute the sonar’s echo is to the transducer.

Sub-Bottom can be used to three-dimensionally delineate contaminated sediment volumes. This technology can also be used to survey a riverbed for buried utilities prior to advancing drilling or vibracoring equipment into the sub-bottom, thus lowering the probability of making contact with or damaging a utility service. 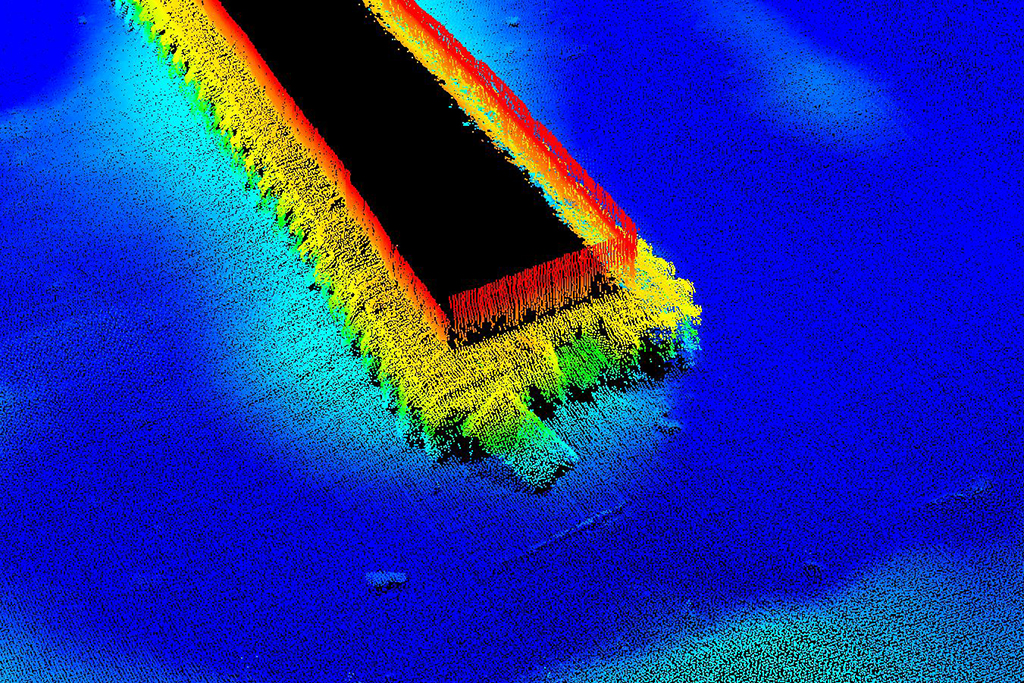 Aqua Survey utilizes multi-beam sonar bathymetry to map elevation changes and resolve below-water structures in a detailed point cloud.  Unlike a single beam fathometer, multi-beam spreads out sonar beams in a fan shape.  This allows for more coverage and accuracy in your survey areas, in a time-efficient manner.

These surveys paint a more complete picture of the area being surveyed versus using a single beam fathometer.  The system works well in rivers, lakes, and bays to support a variety of project needs. 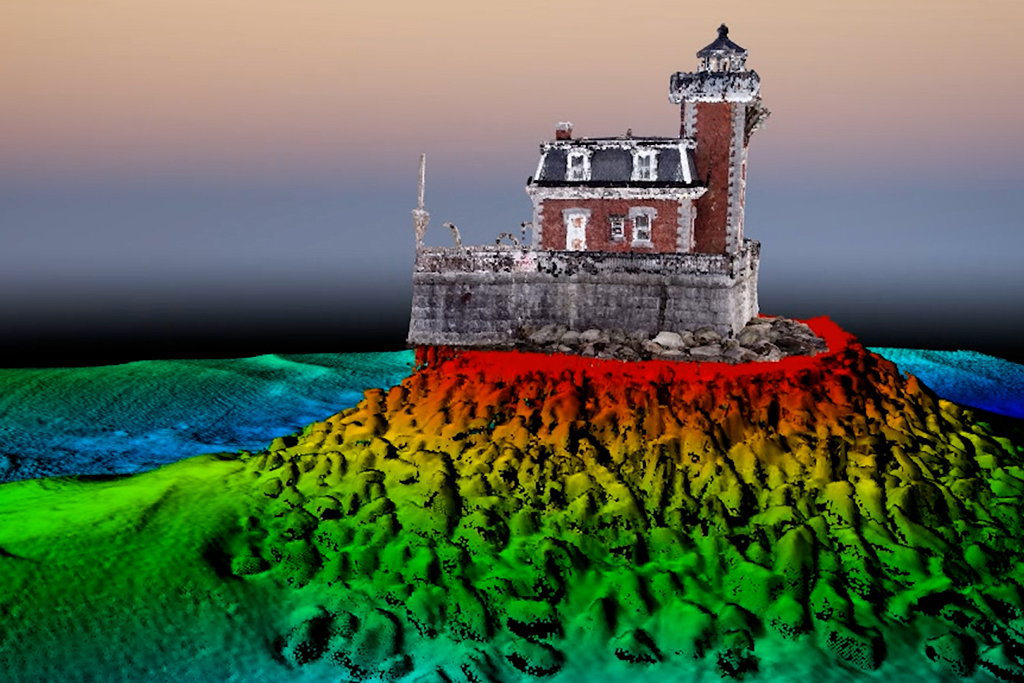 Using a combination of multi-beam bathymetry and UAV photogrammetry, Aqua Survey can precisely map and combine above and below water features into an engineering-grade 3D reality model.  This measurable and feature-rich model can be integrated into Autodesk or your preferred CAD software, or be viewed in a free 3D viewer for easy sharing.  Project Managers and Engineers can finally have the project site on their desktop. 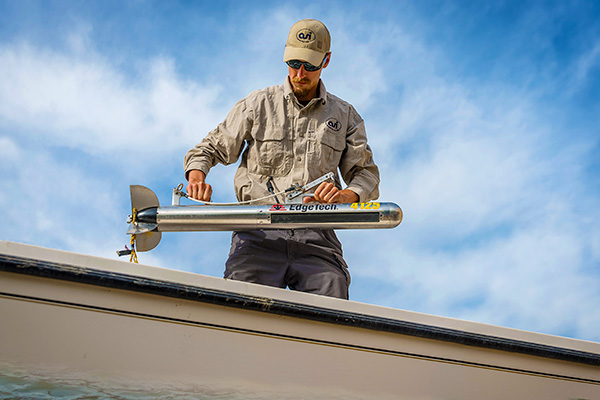 Aqua Survey operates both single and dual-frequency side scan sonar to produce remarkable  real-time sonar imagery of the water bottom.  Side scan uses transducer-produced pulses of sound emitted from a towfish.  The sound waves are emitted at an angle to “illuminate” the bottom.  These sound waves bounce off the relief of the bottom and return to the transducer as a sound reflection.  Images of the bottom’s relief (e.g., sunken vessel or a shoal) can be viewed real-time on the survey vessel and are recorded digitally for post-survey viewing, processing and mapping.

Side scan surveys are used to support: 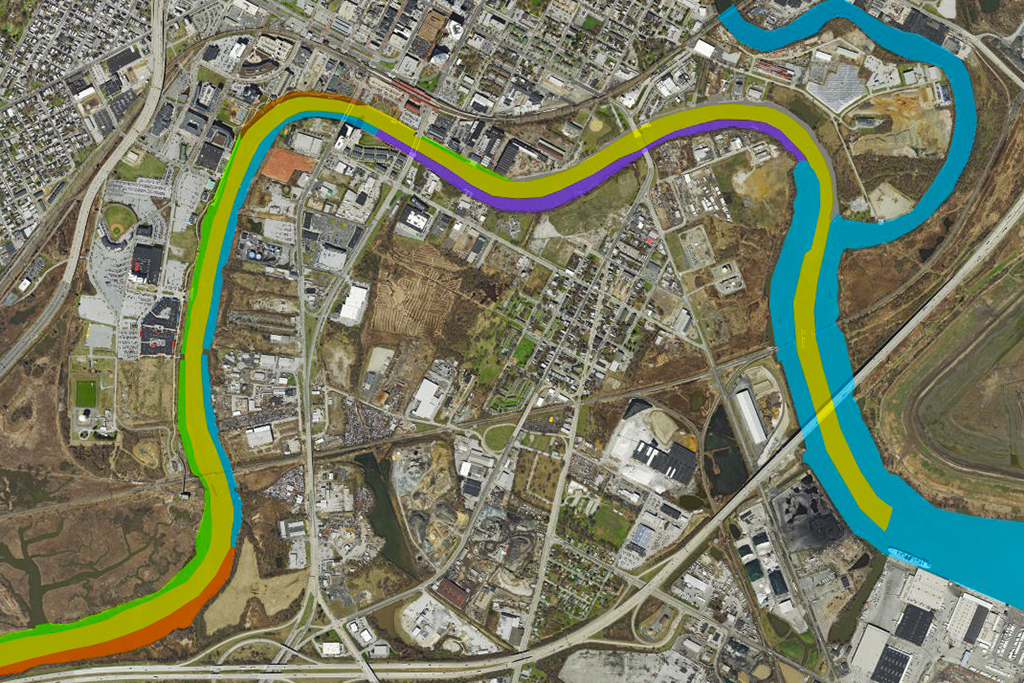 Aqua Survey utilizes depth sounders and side scan sonar to rapidly characterize sediment grain size characteristics to economically map surficial grain size of expansive areas.  Bottom Classification can be used to accurately predict the potential for contaminant loading.  HYPACK software is used for vessel control and tracking.  RTK-DGPS or DGPS precision can be achieved for accurate mapping.  This technology, in conjunction with ground-truthing, can classify: Bedrock, Cobble, Gravel, Sand, Silt and Clay. 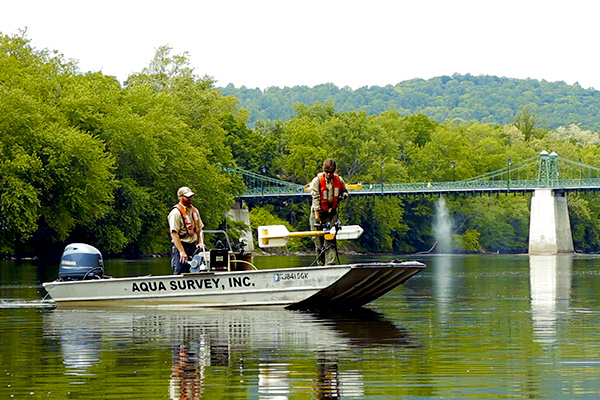 Aqua Survey utilizes magnetometry to detect and map ferrous-based objects that are submerged or buried beneath the bottom of a water body.  Often there is a great deal of background metallic noise due to bridges and other structures that are not targets of interest.  Influence from these objects can be minimized through the use of a gradiometer.  Magnetometers can be towed at relatively high survey speeds (~5 knots) and are used to sweep a site to sense magnetic anomalies caused by ferrous objects.  Data can then be processed to produce maps of targets.

Magnetometer surveys can be used to support: 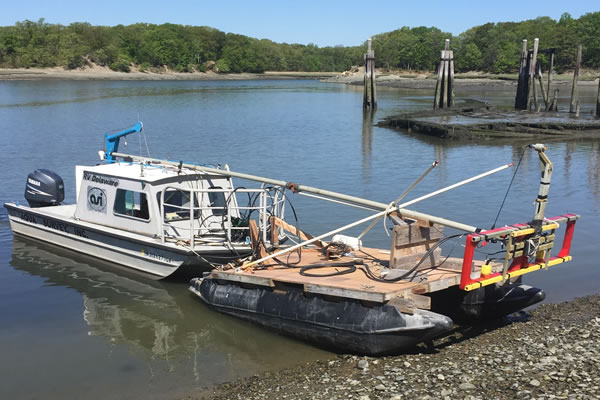 Aqua Survey utilizes electromagnetic (EM) detection systems to detect and map submerged metal targets; both non-ferrous and ferrous.  EM detectors are well known for their ability to detect unexploded ordnance (UXO) and treasure.  ASI’s EM systems are high powered to maximize their detection range.  EM systems can be towed behind survey vessels on floating platforms or submerged benthic sleds, to survey up to 6-meter swaths, towed by a diver (1-meter swath) or included within the nosecone of a vibracoring barrel (4-inch diameter).

An on-water markout can greatly reduce the probability of sampling equipment making contact with or damaging a utility.  Urban waterways are riddled with submerged and buried utilities.  Available markout services rarely flag utilities past the banks of a waterway.  “As-built” plans generally do not exist for older submerged utility runs. Complicating things further, and adding an unacceptable level of uncertainty, pipeline routes have been known to shift from their original placement due to heavy storm surges and other forces.

The use of markout services to protect utilities can never eliminate the possibility, but can greatly reduce the probability, of a utility being damaged.  Take full advantage of Aqua Survey’s on-water markout services prior to penetrating an estuary bed, riverbed, lakebed or pond bottom with earthmoving equipment, piles, drill strings or sediment coring equipment (e.g., vibracoring).

Typical tools for on-water markout may include: 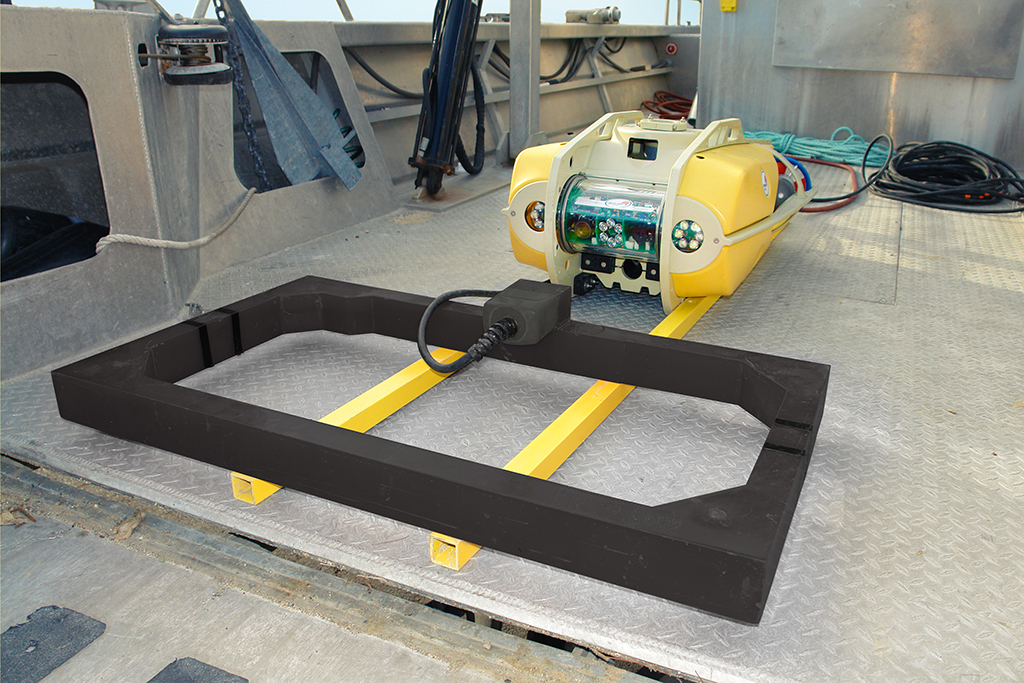 We are scientist-mariners by trade and understand how to effectively conduct UXO/MEC/MC surveys below the waterline. Our goal since 1975 has been to get your project done safely, professionally, on-time and on-budget to make you look good. We offer you a single source solution for underwater UXO/MEC/MC investigations.

We have the right people, tools and attitude to get you what you need when you need it. Submerged and buried unexploded ordnance (UXO) and other munitions and explosives of concern (MEC) pose physical, environmental and human risks. Aqua Survey owns and operates submersible high-powered electromagnetic detection systems that can be towed on the water’s surface or along the bottom. Large high-powered transmission and receiver coils (based on EM61-MK2HP technology) provide significant sub-bottom detection distance. By utilizing an array of one-meter receiving coils, Aqua Survey can process lanes up to six-meters wide.

DGPS and USBL electronics are used to geoposition the system to allow for accurate charting and re-acquisition of targets. Aqua Survey can deploy buoys over targets of interest in real-time, process data to classify targets, and provide electronic files and printed surveys. 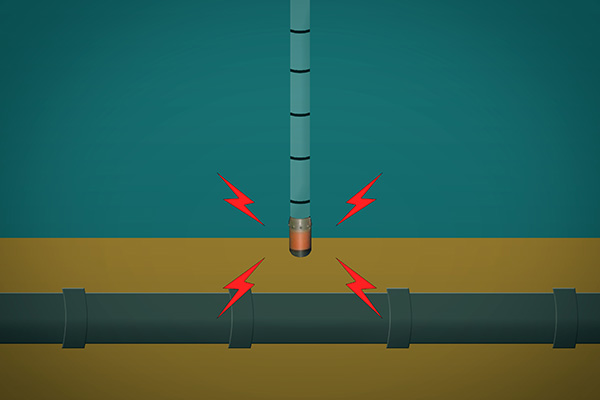 Aqua Survey has developed a sediment vibracoring system incorporating electromagnetic transmission and receiver coil technology called Smart Core™ vibracoring.  This breakthrough technology signals the operator when the nosecone of the core barrel is near a metallic object, allowing the operator to greatly reduce the probability of making contact.

Aqua Survey has roots going back to the mid-1970s when surficial sediment grab samples met most sampling requirements.  As the environmental industry matured, so did our sampling methods.  We began gravity coring in 1977, piston coring in 1979 and vibracoring in 1984. It is often desirable to collect sediment vibracores in areas with known or unknown submerged or sediment buried utilities, unexploded ordnance (UXO), cultural resources or other unknown objects to be avoided.

Areas of known military waste often need to be assessed for contaminants leaching into the aquatic environment.  The use of the Smart Core™ can safeguard field technicians from UXO during coring activities.  The Smart Core™ can collect up to 20-feet of a continuous 4-inch diameter core in a flexible inner-core liner.  Electromagnetic data are viewed real-time and logged simultaneously into a digital file.

To assess the spread of environmental contaminants from decaying MEC/UXO, the field sediment coring technician must be safeguarded from striking the MEC/UXO, or including smaller MEC/UXO’s (<4 inches) into the sediment core sample.  Continuous sediment cores up to 40 feet long are commonly collected as part of field sampling campaigns.

Traditional EM MEC/UXO surveys can only detect objects buried in the top meter or two of the sediment.  Without a nose cone mounted detector on the coring device, the operator would be at risk when sampling beyond the detection range of traditional EM systems.  Detector coils must be designed, prototyped and field tested that are able to withstand the associated destructive forces of a high-powered vibracore system. 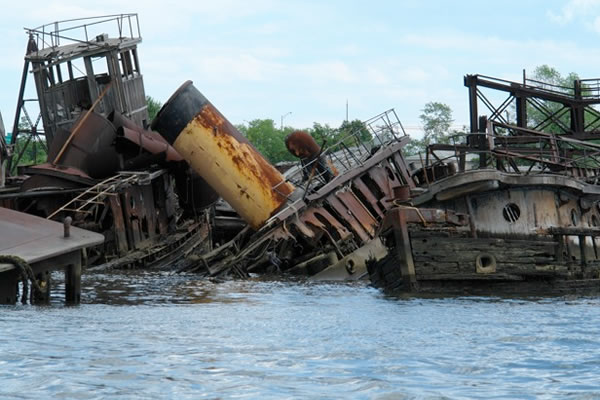 Hidden below the water’s surface are numerous items that once played an important role in our life or the lives of those in the past. Many are treasures that we would gladly recover and others hold the clues to ancient cultures and forgotten traditions.

Aqua Survey can employ markout tools that can be used to chart known and unknown artifacts and to support cultural resource inventories, archeological digs, precious cargo salvage and treasure hunts. 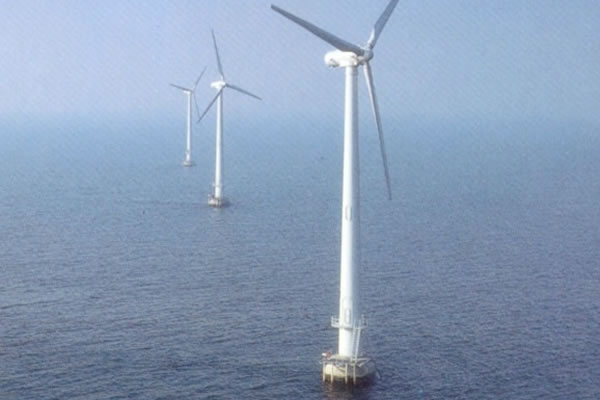 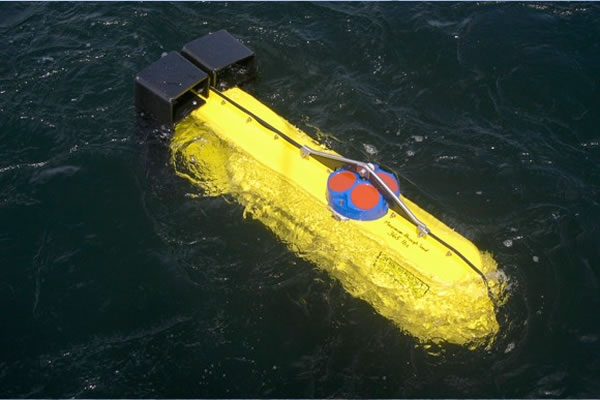 Current data can be collected at any water column depth and is used to collect data offshore, near-shore, in estuaries, rivers and lakes.  Either type can be deployed for long-term observations or “dipped” for a real-time look.  ADCPs can collect surface to bottom data when towed or attached to a vessel or mounted on the bottom looking up. 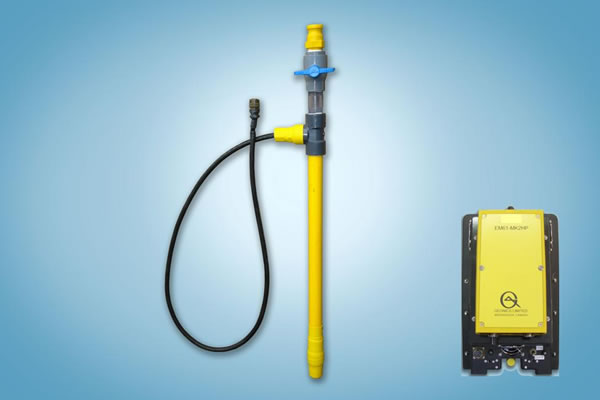 This system provides a safe, efficient and cost effective alternative
for the probing of sediment or soils for metal objects.  Probes can be operated without water-jetting in unconsolidated sediments.  Jet probes are used for a variety of purposes and are normally deployed in conjunction with other data collection techniques such as hydrographic surveys, sub-bottom profiling, side scan sonar surveys and vibracoring.

Jet probe surveys provide information by surveying the thickness and layering of sediment covers on land or underwater.  A jet of water is used to penetrate the sand cover or unconsolidated sediment.  At Aqua Survey we have combined this standard tool with another standard; the Geonics’ EM-61 console.  A new proprietary hybrid system combines Geonics’ EM-61 consoles with Aqua Survey-developed electromagnetic sensor tipped jet-probes.  This combination allows divers as well as topside and terrestrial technicians to advance an EM probe by utilization of a water-jet at the tip of the probe while at the same time detecting both ferrous and non-ferrous buried metals.

The probe can be attached to various length handles (2-40 feet).  Operators are alerted both visually and audibly when metal objects are detected in advance of the probe.

An EM-Tipped Jet-Probe™ will allow investigators to surgically and safely probe areas with:

Combining new with proven equipment brings the detection force of state-of-the-art high-powered Geonics equipment to the seafloor.  It provides the diver real-time target response data, the ability to follow monitor-displayed survey lanes and the ability to view completed survey lanes. Precision positioning the EM Diver Sled™ in the shallows is accomplished with a mast-mounted GPS antenna.  In deeper waters, a submersible USBL system is utilized to precisely position the receiver coil.

Survey lanes can also be established from the placement of underwater control point monuments and the use of guide lines. We have extensive experience utilizing EM-61-based EM Diver Sled™ technology on both sand and mud bottoms. Aqua Survey will provide diver training in the use of the system. 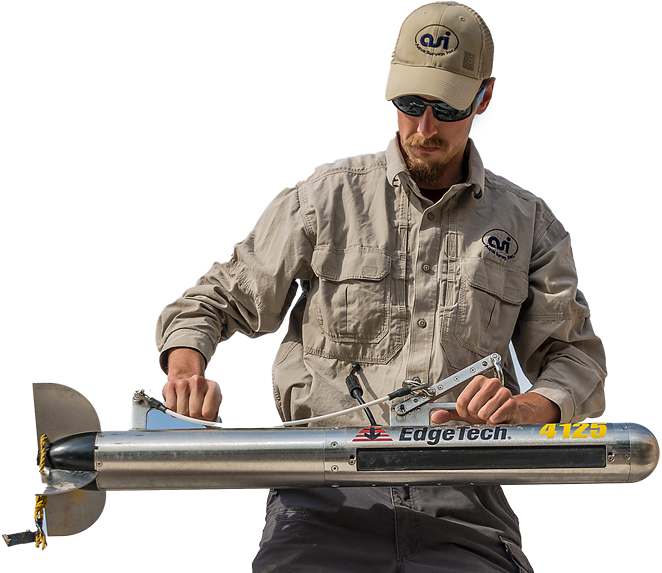 Aqua Survey, Inc. has proven and refined methods to get your job done right.  We’re also innovators that don’t shy away from a challenge. Contact us today for a free consultation on your project.